Menu Close
A Touch of the Divine: A Reading & Conversation with Yann Martel
Published on 11.05.2021 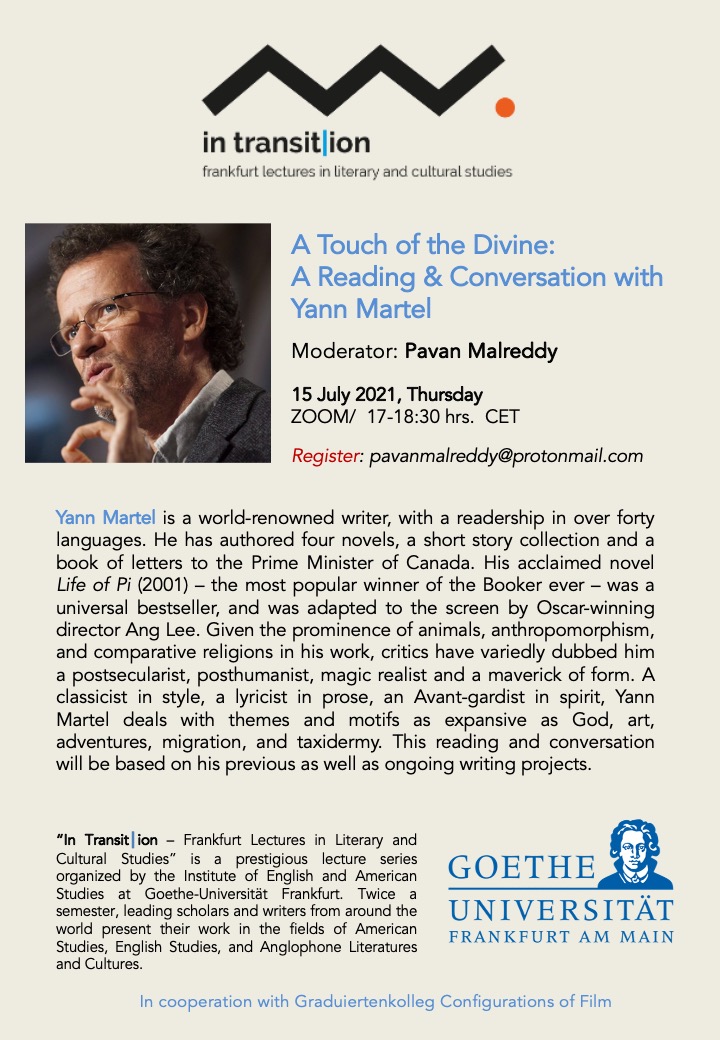 “In Transit|ion – Frankfurt Lectures in Literary and Cultural Studies” is a prestigious lecture series organized by the Institute of English and American Studies at Goethe-Universität Frankfurt. Twice a semester, leading scholars and writers from around the world present their work in the fields of American Studies, English Studies, and Anglophone Literatures and Cultures. On July 15, 2021, Pavan Malreddy, member of the Graduiertenkolleg “Configurations of Film”, will host a reading and conversation with Yann Martel.

Yann Martel is a world-renowned writer, with a readership in over forty languages. He has authored four novels, a short story collection and a book of letters to the Prime Minister of Canada. His acclaimed novel Life of Pi (2001) – the most popular winner of the Booker ever – was a universal bestseller, and was adapted to the screen by Oscar-winning director Ang Lee. Given the prominence of animals, anthropomorphism, and comparative religions in his work, critics have variedly dubbed him a postsecularist, posthumanist, magic realist and a maverick of form. A classicist in style, a lyricist in prose, an Avant-gardist in spirit, Yann Martel deals with themes and motifs as expansive as God, art, adventures, migration, and taxidermy. This reading and conversation will be based on his previous as well as ongoing writing projects.

Please register for the online event:

News
Back
Previous
Radio interview on “Pandemic Media”
"Pandemic Media. Preliminary Notes Towards an Inventory”, the newest publication in the open access book series “Configurations of Film“, was presented by the editors in two episodes of the radio show "Avez-vous du WiFi?", a weekly radio show hosted by Alex Chartrand on CISM 89,3FM, the public radio of the Université de Montréal.

Next
Extension of funding period
Great news: The German Research Foundation (DFG) has extended funding for the Graduiertenkolleg "Configurations of Film"!