The 69th Berlin Film Festival is over again and unfortunately already. What’s left are used brochures, crumpled tickets, handwritten superschedules as priority lists of films, and also some popcorn that we found in our coat pockets back home.

The most important thing left to a small group of GK people visiting this year’s Berlinale are great impressions of films that let us think about home. Be it home as a theoretical concept, as an imaginary force, or as an illusion. Be it as a geographical location, as earth. Or be it as cinema that is meant to be the home of film.

Our Berlinale trip was riddled with notions of home. In African Mirror (Mischa Hedinger, CH 2019) we were part of a cinematic field trip investigating how Europe used Africa as a projection surface for its own wishes and imaginations, frustrations and fears. Another remarkable film is Thomas Heise’s documentary Heimat ist ein Raum aus Zeit (D 2019), which lasts 218 minutes and traces the history of his own family—by listening to the voices and sounds Heise produces while reading letters of love and fear, journals, and notes. The film merges them with images from now, but mainly from times of terror under the National Socialist regime that didn’t leave the family without a trace. I would also like to mention the calm and observatory manner in which Nikolaus Geyrhalter portrayed selected spots of the Earth (A 2019) by simply following the film’s leading question, focusing on people and industries of the global north, of what humans do with and to the surface of the earth. I think this question is getting us somewhere—at least back to the question of what we consider home, and we’re looking forward to some of the answers that the 70th Berlin Film Festival will present next year.

Fig. 1:
Tunnelling Work, Brenner Base Tunnel between Italy and Austria, Earth (Nikolaus Geyrhalter, A 2019), Still.
Kolleg events
Back
Previous
Casino, Campus Westend, Goethe University, Frankfurt
Workshop with Rebecca Schneider
By discussing two of Rebecca Schneider´s texts ('A Small History ((of)) Still Passing' and 'That the Past May Yet Have Another Future: Gesture in the Times of Hands Up') the scholar invites us to rethink visual culture in terms of performativity and temporality and challenges to re-evaluate traditional codes of communication by appealing ethically to our 'response-ability' in contemporary political-authoritarian contexts.
Next 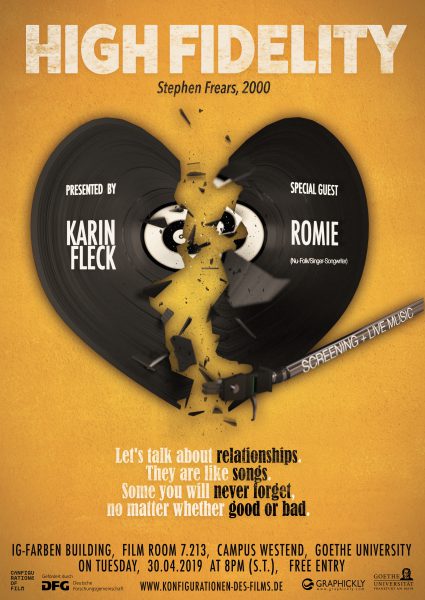 Room 7.213 of the IG-Farben Building
High Fidelity – Screening & Live Music
The Graduiertenkolleg "Configurations of Film" would kindly like to invite you to this collaborative screening-event with our special guest Romie.