If Adieu au langage (2014) showed what 3D could to for a cinema of attractions which moves beyond the special effects blockbuster, Le livre d’image, which premiered at Cannes 2018, is also, and perhaps – despite its title primarily, a soundscape which reinvents the sonic dimension of cinema. The best way to experience this image-soundscape is in the form of an installation, which Godard and his cameraman Fabrice Aragno first presented at the Theatre du Vidy in Lausanne in the fall of 2018. Now, for the first time in Germany, the installation will be shown at Mousonturm from October 29 through 31, 2019, in a cooperation between Casa Azul, Mousonturm and “Konfigurationen des Films”.

On October 30, the projection will be preceded by an introductory round table with Fabrice Aragno, Vinzenz Hediger and others. 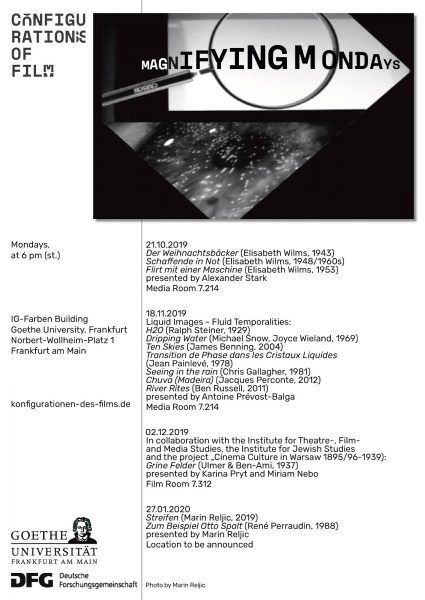 Media and Film Room in the IG-Farben Building
Magnifying Mondays 2019/2020
The Graduiertenkolleg “Configurations of Film” invites you to take part in our screening series “Magnifying Mondays”.
Next